Cape Town is the most Southern city in Africa

Table Mountain is a prominent part of Cape Town's skyline, and an icon for the city.

Cape Town, also known as "The Mother City", is Africa's southern most city with a population of nearly 4 million people. It's technologically developed with a Mediterranean climate and many natural attractions throughout the city and in the greater Western Cape province. It's the second-most populous city in South Africa after Johannesburg.

We're submitting a bid to host DebConf16 in Cape Town.

[edit] Weaker points in our bid

If you are interested in joining this initiative, but perhaps not quite affiliated to Debian yet, some volunteer tasks are listed on the /volunteers page

The following people support this bid:

All of us are aware that DebConf15 will appreciate our help finishing up post-conference tasks, and that it is in our interest to finish these tasks in a timely fashion. However, we have not yet finalised who will attend DebConf15.

We investigated several /Potential Venues around the Cape Town area, before settling on our favourites. The choice isn't final, yet, but we have a first choice venue, and two reasonable backup options. The preferred venue is on the main campus of University of Cape Town (UCT), using university lecture theatres and student dormitories. One backup option is also a UCT campus, but it's the Business School campus, at the Waterfront, which is run as a conference venue and hotel by students. The other backup option is not affiliated with UCT - a conference hotel in Stellenbosch, about half an hour's drive out of Cape Town. The UCT main campus would be the cheapest option by far, as we'll likely be able to use the lecture theatres at no cost, and the dormitories are very cheap.

The venues are covered in more detail on sub-pages:

Being a coastal city, Cape Town is rich in a wide variety of sea food.

Cape Town and its surrounds are host to a large amount of wine farms, producing many award wining wines that are exported globally. It also has a blooming craft beer and micro-brewing community.

Being in the southern hemisphere, it would be winter during the usual DebConf time.

The primary venue, at the University of Cape Town would only have campus accommodation available during the winter and summer vacations, we don't have that much flexibility in dates. The proposed dates are 1-15 July 2016 (give or take a few days) if held at the UCT, and 6-20 August 2016 (approx, flexible) if held elsewhere.

Cape Town's winter is fairly rainy and windy. Combined, these can be fairly unpleasant and cold, but not freezing.

Many outdoor tourist activities aren't really possible during the winter, and things tend to close down outside the summer tourist season. But, on a nice day, one can hike, enjoy the beaches (but not necessarily the swimming) and see wildlife.

In the case of a winter DebConf, we'll have to be prepared for bad weather. Some ideas proposed so far for winter breaks:

Cape Town is rather remote for all of the northern hemisphere. Travel costs will be higher than average, but other costs such as accommodation and food should be significantly lower.

East Coast USA is about 16 hours' flight from Johannesburg, at approx. €1500. Prices are usually similar via Europe.

There are many other connections available via Johannesburg's OR Tambo Airport, including:

Connections between Johannesburg and Cape Town (a 2 hour flight) are plentiful — it is one of the top 10 busiest air routes in the world.

Requirements for all visitors to South Africa:

Many nationalities are exempt from requiring a visa to enter South Africa, citizens of these countries may visit South Africa for up to 90 days (or in some cases 30 days) without a visa. This includes most of Western Europe, USA, and Canada.

Other attendees need to apply for a visa. Visa applications don't need to be made in-person — there is no visa interview — they can be done by courier, Some countries citizens are charged fees for a visa, for others the visa is free of charge.

Conference attendees should apply for an ordinary tourist visitor visa (Form BI-84). The conference should provide a letter of invitation to every attendee that requests it, and notify the Department of Home Affairs that the conference is taking place.

South African missions abroad. Mission web sites (for missions that have them).

Bad news for Cheese lovers: Dairy products are amongst the items whose import without approval is restricted. Some of the team members never knew this, and may have been breaking the law for years, YMMV.

We could contact the Department of Agriculture, Forestry, and Fisheries, to request a blanket approval for DebConf attendees.

South Africa has strict exchange control, and transferring large sums of money in and out of the country requires Reserve Bank approval.

However, normal tourist activity requires no authorization. DebConf Attendees shouldn't be affected by the exchange control laws at all. They will likely only be an issue for the conference, moving Debian money and/or sponsorship into and out of the country.

Strictly speaking, foreign currency brought into the country must be converted to Rands within 30 days. Large, say over R10k, transfers by banks can take a few days, because of the Reserve Bank approval, but shouldn't be problematic. Individuals transferring over R1m out are usually required to pay a 10% tax.

South Africa has quite expensive fixed-line Internet connectivity, compared to the rest of the world, but fairly cheap cellular and wireless options.

All South African cellular networks use GSM and the major ones have LTE coverage within Cape Town (although not necessarily over the conference venues). You can expect to pay on the order of R5 (€0.36) for a pre-paid SIM card, and R100 (€7.24) for 1GiB of data, for a month. You will be required to register (RICA) your SIM card with the Government, providing ID and proof of residence (you can usually do this at purchase).

Aside from the usual International sponsors, these companies have a presence in South Africa (or are local), and may be worth approaching for sponsorship. None of them have been contacted.

Under South African law, we could register a Not for Profit Organization quite easily. We've spoken to a lawyer about doing this.

It may be possible to become a tax-exempt Public Benefit Organization, but it would take at least a year for a company to get PBO status.

Given the difficulty in getting tax-exempt status, we may want to look to a sponsor organization to receive and spend local donations for us. Praekelt Foundation has done this for Pycon.za.

There are a few high-street computer stores (there are a couple in the V&A waterfront, and at least one on Main Road, below UCT).

However, to purchase any specific hardware or components, one probably wants to use an online specialist. There are several in South Africa, and some offer next-day courier service (for a fee), or pick-up from their warehouse (half an hour's drive away). 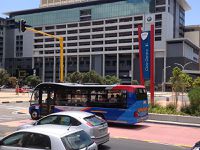 A MyCiTi bus at the central station

The Metrorail train lines don't cover the city very well, and have had crime trouble in the past. There are sections that are considered safe during the day, and the Southern line that serves the university to town section is arguably the best functioning. Recently, the GoMetro app made it easier to check the state of the line in real time. Rondebosch (below UCT) to Cape Town Central Station takes about 15 minutes. Plan to have adequate time for delays, but in heavy traffic the trains are the better option. Going the other way, the views by train to Simon's Town are spectacular.

The unregulated Minibus Taxis are considered by some not to be particularly suitable or friendly to tourists, but as an African experience is fun and efficient. The best way to utilise this mode of transport is to ask people around you which stop to go to to get where you want to go, and if you feel uncomfortable, to ask someone for help. South Africans are very friendly and eager to help, in general. Travel times are similar to the trains, and they're very cheap.

More recently, there has been a rise in metered Taxi cabs, and Uber has launched, competing squarely with them. Taking metered taxis or rental cars are strongly dependent on traffic, and the university to town can take anything from 15 minutes to an hour, 25 minutes being more typical.

You can expect to pay around R10 (€0.72) / km for a metered taxi. Drivers are often open to negotiation up-front on a flat fee for a trip.

Launched for the 2010 world cup, there is a bus service, MyCiTi, that covers the City Bowl, Nothern Suburbs and airport fairly well. At the time of writing there is not a convenient link between MyCiti and the University in Rondebosch. Commuting times are similar to rental cars, although they have dedicated lanes during peak traffic. MyCiti Android App.

We would recommend that skittish attendees use MyCiTi, Uber, and metered taxis to get around Cape Town.

The University of Cape Town also has a dedicated 'Jammie' shuttle service, which we are currently investigating as the official DebConf travel option if the conference is held at the university. Holiday schedule.

Cape Town is home to the Cape Argus cycle tour, and is readily accessible by cycle for both pleasure and commuting, on road and off. Lately, the city is becoming even more cyclist friendly, as part of the integrated rapid transport (IRT) developments.

Cape Town also proudly hosts the Two Oceans Marathon, which is second only to the Comrades. The city is populated by avid runners, and it is virtually possible to transverse Table Mountain to get anywhere in Central Cape Town if that's your thing. The contour path right behind the university connects with town to the north (approx 16km unpaved road), and reaches further than the Kirstenbosch botanical gardens, for a commute with a difference. (For an afternoon hike, head up about 30 minutes slow climb-walk to the contour path and walk a circular route in the forest which lasts an hour). Some people take it as far as the beaches on the Atlantic Seaboard, but don't do this if you're in a rush.

Alternatively you can leave the contour path and cross the mountain for a hike - apparently a previous president took this route to work daily. For any hikes on the mountain, the Slingsby maps are highly recommended and beautiful mementos to boot.

Swimming to most places is possible but not really suited for commuting yet; it takes long, the water is rather cold and there may be sharks or strong winds. There may also be whales and orcas. Best to stick to organised events or boat charters.

Bundu-bashing through the wild is not recommended - stick to the multiple, well sign-posted trails . The Cape is covered in fynbos which is scratchy, and the rest is boggy or sandy.

As some our our venues are less well served by public transport, we've investigated hiring buses for airport pickups and/or evening round-trips to the city. UCT has it's own Jammie shuttle bus system that should be hireable (and its regular routes may even be useful to attendees).

South Africa has a huge economic inequality, high unemployment, and many people living below the poverty line (close on 50% of the population). This results in levels of crime, higher than Europe or the United States, but equivalent to other locations that DebConf has been held, in the past. The majority of crime occurs in poorer areas outside the city.

One can visit and live in South Africa, quite safely, by simply being aware of ones surroundings:

All the conference venues we're looking at provide good security and would be safe environments. Petty theft would be our main concern in these areas — don't leave phones, laptops and other valuables unattended.