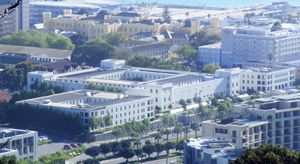 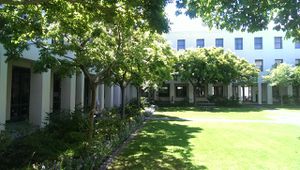 Model of the Breakwater complex

Breakwater Lodge is in the Victoria & Alfred Waterfront, in the City Bowl of Cape Town. The Waterfront is a popular tourist destination, with many shops, restaurants, bars, and hotels.

It was originally a prison for convicts who built the breakwater sheltering the harbour. It now houses the Business School for UCT, and is run by students as a hotel and conference venue.

[edit] How much does it cost to rent these facilities?

[edit] How far away are the locations from each other? (auditoriums, hacklabs, restaurant, sleeping quarters, info desk)

The entire campus is located inside the V&A Waterfront, a popular tourist destination, with many shopping centres and restaurants. The nearest is probably 5 minutes walk away.

[edit] What kind of places are available suitable for hacklabs, workshops, BoFs and talks?

The building is an ex-prison, that has been converted into a business school university campus. It has an attached hotel, run by the students, to gain business experience.

The ground floor is a square of full of small cell-sized meeting rooms, that probably wouldn't be useful to us, but could work as quiet hack spaces or hold tiny BoFs. Above is a more modern floor, with some larger, unstructured rooms that we could use for talks, BoFs and hacklabs.

There are many (~7) fish-bowl raked lecture theaters, that would probably be well suited to BoFs, but only seat 70 people. For talks, we'd probably need their largest space, the exhibition hall, and one of the other 120 seat rooms.

[edit] How many people fit in each of them?

The exhibition hall splits in 2, and, together, holds up to 220. The board rooms, faculty, and executive rooms hold 120. The lecture theateres hold 70. The syndicate room holds 50. And there are many smaller rooms for less than 10 people.

[edit] How flexible can that be handled?

[edit] Can smaller auditoriums be merged into a bigger one?

The only rooms that can be merged are the two halves of the exhibition hall.

[edit] Are tables/chairs fixed, or can we arrange them to fit more people/give more room to the people that we need?

The lecture theatres have fixed seats, everything else is unstructured.

[edit] Is the venue ready for handicapped people?

The building has wheel chair accessible elevators and ramp access to all the buildings.

[edit] Are there people with experience handling handicapped people, who checked that?

[edit] Are blueprints with exact distances available to us?

Haven't requested any, yet.

[edit] What kind of audio equipment is already present at the auditoriums?

The Lecture theatres have sound systems. Otherwise, we haven't investigated, yet.

[edit] Will the hacklabs be allowed to stay open 24x7?

[edit] What kind of security will be there?

The venues are presumably open after hours, but this hasn't been checked. Must be confirmed with the venue.

[edit] Are there any limitations regarding the consumptions of food / alcohol?

[edit] How far is it to the nearest convenience stores / all-night restaurants?

5/10 minutes walk to several pubs and restaurants, open until 2am. There is a large shopping centre equally far.

[edit] How much does it cost per person per night?

This rate is their normal hotel rate, a mid-market rate for the area. In fact, there are nearby hotels offering lower rates online, for 2015. Breakwater Lodge list a University-sponsored event rate, that we may be eligible for, at R 580 (€40) per person per night, shared occupation. We didn't have university approval yet, at the time we requested our quote.

[edit] Is the place where people are going to sleep near the conference facilities?

The hotel and conference venue are in connected buildings.

The hotel has 191 total rooms, capable of hosting 308 people with sharing. (12 rooms are triple units, and 18 rooms are quad units.)

[edit] Is it able to handle non-native speaking people? (i.e. do the people at the sleeping facilities speak English?)

[edit] Will there be a need of a "Debconf" info-desk, or would the local (hotel or such) people be able to handle that themselves?

We anticipate needing an info desk staffed by Debian volunteers.

[edit] Will it be possible for couples to stay in their own rooms?

[edit] How many room keys would be available?

[edit] Are there other hotels around?

There are numerous hotels within walking distance, ranging from inexpensive hostels to five-star luxury.

[edit] Are there rooms ready for handicapped people? How many?

1 Double and 1 Twin room are listed as Universal Access.

Any time of year. We quoted for August.