Hello, and welcome to the DC11 bid page for Quito, Ecuador! We ran for DebConf 10, where NYC was selected, and we're now even more sure than Quito will make a great host for 2011.

Ecuador is a major tourist destination in Latin America. Tourism is one of the big sources of income for most of the population. The local currency is the US Dollar, and most people speak english in most establishments, which are of international standards. Quito has an excellent record hosting big conventions, and both the city and the national government invest lots of money in tourism every year.

Quito. Oh, Quito. The first city in the World to be named a World Heritage Site. Visited by millions of international tourists each year, Quito's become a reference on biodiversity tourism and provides great sights for visitors and locals alike.

Our first financial approach make us think that we can expect to be in a budget similar to that of DC6. This, of course, might go up with inflation or go down as long as we get sponsors, which we have actually done with some success. On 2010 we managed to secure venue sponsors, cheap hotel prices, and a more sustainable focus for the conference, which resulted in a lower preliminary budget.

May-July is an appropriate window for the DC11 to eventually happen in Quito. July can be a very attractive month since you get clear blue skies with a very nice temperature. Then again, Quito's well known for having four seasons in a single day. Support Quito for DC11!

This is a list of people who have already committed to take this bid on. As more people will join this initiative, they will be listed in this page. Debian Ecuador is the main organization behind the bid, and currently the following organizations have stated support for the bid: Tecnologías Libres del Ecuador ONUVATEC, Asociación de Software Libre del Ecuador (ASLE), Debian Ecuador, Ubuntu Ecuador, ESOL/Universidad Nacional de Loja, Escuela Politécnica Nacional (Carlos Novoa), Universidad de las Américas (Xavier Armendáriz) and Universidad Politécnica Salesiana (Renato Cumbal)

While Ubuntu Ecuador holds nationwide Ubuntec's, this year three big events are to be held: the FLISOL 2010, which is a big event made in Latin America to promote free software installation, the ECUASOL 2010, which is a nationwide congress on free software, and several, smaller BarCamp events in Quito, Loja and other cities. Both bureado and ailefi, local team actives, have had experience in the organization of big international events such as FMCL in Venezuela, four years in a row with thousands of visitors, and are also DebConf attendees.

See our list of hotels/hostels, prepared by the local team, here 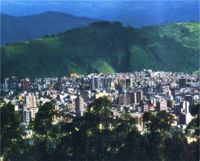