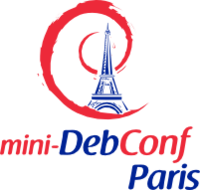 In France we have the Daylight Saving Time occuring during the night of october 31. It means that Sunday morning at 03:00AM, you have to set your clock at 02:00AM. Think about it or you'll be early in at conferences Sunday :)

This section presents the possibilites of conferences and workshops for the mini-debconf Paris 2010.

[edit] Schedule of the event

We also organized a BSP which be held in the same building (exact room numbers will be added later). Please subscribe yourself on http://wiki.debian.org/BSP2010/Paris if you intend to participate/attend.

Talk proposals are closed. Thanks to everyone !.

Informal or list-based, depending on the number of attendants.

Please note your PGP ID on the list below, so that I can generate a list and publish it for everyone to check their key fingerprint. (Tanguy Ortolo)

Also as a reminder the key signing party howto.

If you expect to make use of a list you should:

- check your key id and fingerprint on the file you intend to use (there is the txt and the pdf now :(( )

- compute the checksums of that file to globally check the consistency of the file.

[edit] Save the trees! here is a printout on 4 pages for the keysigning party

If you prefer a paper document for the key signing party, here is re reworkes list reworked with pdfLaTeX. It will eat 4 pages rather than 13: Media:Ksp.pdf

You attended the keysigning party, and it is perhaps the first time you this number of keys to be signed. You can do it conveniently with packages designed to make easier this task, like pius.

Check whether there exists no directory /tmp/pius_out. Pius creates a new directory with a predictable name in /tmp, which can be considered as a security issue.

Create a file which contains every keyid which you are willing to sign, one per line. The keyid is a word made of 8 hexadecimal digits, which can be found at the end of the key's fingerprint. Write the 8 digits with no space left in the file you will create. As an alternative, you can copy and paste keyids from the document which was used to print the list used during the keysigning party.

Suppose that this file is named /tmp/keyids. Then you can fetch every key and add it to your default keyring (or just refresh it in the key ring with the command:

For some keyids, you may receive the error message: "key xxxxxxxx not found on keyserver". Then write to the key's owner and ask him to send his key to you directly in an ascii-armored format, or better to upload it to a server. You can invite him/her to use the same keyserver as you do.

making the list of the keys you could retreive: the following command copies the keys which are on your keyring into the file /tmp/received-keys

Pius automates the signature of the keys and their sending by e-mail, especially if you trigger the -a switch to use gpg-agent, or the -p switch to make pius cache the passphrase, in order to avoid asking your passphrase for each of the keys. Here is a useful command to sign the series of approved keys:

For each key, you are asked about the trust level which you want to attribute it. If a caching mechanism is in use, you are asked your passphrase only once.

If you want to sign the keys with another personal key, you will have to run the previous command again, while changing the signer's keyid.

-*** REGISTRATIONS ARE CLOSED ***-. We're sorry but given the hugh number of people interested in the event, we have to urgently close the registration. Thanks for your interest in the Mini-DebConf Paris 2010 !

Have a couch in Paris ? Want to welcome someone attending the Mini-debconf Paris 2010 ? Please let your information here :

A hugh thanks to Valessio S Brito for the official logo.

[edit] Pictures of the event