This table shows those that are part of the second order (which went ahead on 27th March 2010) for 80 yards of cloth. If you add yourself to this list please confirm with phil at hands dot com.

The skirt-kilt and Waistcoat have not been ordered in the second batch so these are guestimates based on the first order. The shorts and miniskirt were mentioned in passing by Lesley -- she prefers shorts because they're more "comfy" -- she didn't mention prices, but I (fil) can ask if you're interested

Check if the larger of your waist or seat measurement is over 46" (measurement guide), then you need an extra yard of cloth for kilts, which for machined kilts will cost £30.00 more for the cloth and stitching -- hand-stitching costs more, but I don't know how much, ask if it's relevant to you. I imagine women's skirts are different again.

We have it rendered large or if your browser scaled that and makes it ugly, try small

The size of that is such that the pattern will repeat about every 10 inches (with slight variation due to the vagaries of weaving).

The colours on my monitor actually provide a reasonable match to the finished cloth, but monitors vary, so no guarantees there.

When instructing a weaver, it's worth making sure that they get the cloth the right way round, so that when made into a kilt, the morse will read left-to-right and top-to-bottom, rather than bottom-to-top as it is in these images -- they got it right on the first run, but remember they're not used to having to worry about such things, so it's worth reminding them.

The copyright on the pattern resides with Hands.com Ltd., having been assigned from Geoffrey (Tailor). I'm happy to distribute it under the GPL and/or write to any weavers that question their right to use it assuring them that they can. Obviously given that Geoffrey (Tailor) did a good job the first time round, and are familiar with the issues involved in getting it right, I'd suggest using them.

[edit] Notes about the tartan design:

It's predominantly red, to reflect the red from the logo, made of two shades of red to give a gradation towards the middle (the nearest thing I could get to a swirl in a plaid) the blue is "Electric Blue" which makes sense, since we wouldn't get far without electricity, and can be said to be a reference to Captain Blue Eye, there's a fair amount of black, and a little yellow, as a nod towards Tux, and the white spells out DEBIAN in morse (with a correct 1:3 ratio for dots to dashes, and for the pauses in and between letters).

Also, unusually (although not uniquely) for a tartan, it's not symmetric. The morse section does not repeat in reverse, so while it still looks like a fairly conventional tartan (if a little busy in the morse section) we don't get the reversed morse (which the designer helpfully pointed out would spell "ANIVEU" ;-). This means that the morse section can be made relatively larger without increasing the overall size of the sett.

By dint of the registration with The Scottish World Tartan Register mentioned below, we have been grandfathered into The Scottish Register of Tartans which gained its Royal Assent in 2008.

Here is a copy of the original SWTR certificate -- number: 3210 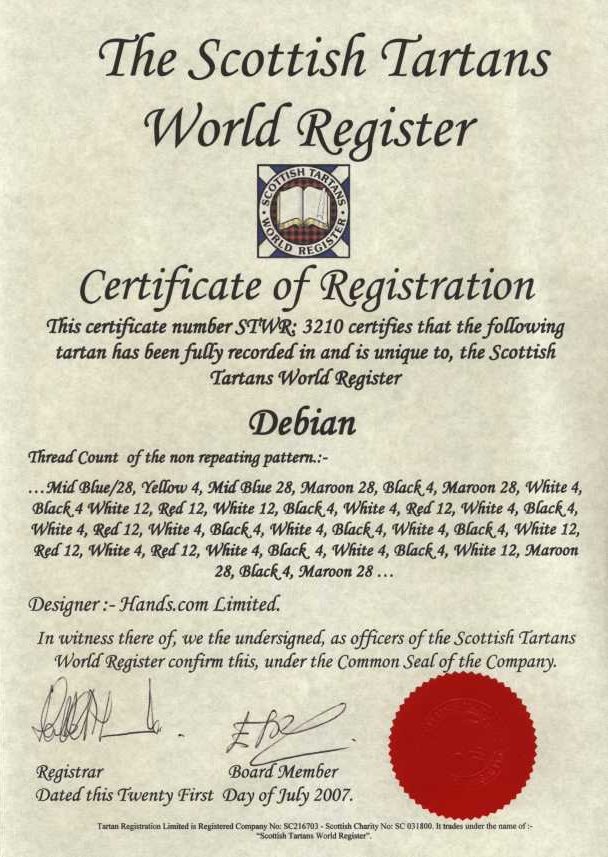 These are the people that tidied up the original idea for the tartan into the design we ended up with, and are also the people that wove the first batch of tartan, and kiltmaking. They are also tailors, so can provide all the other bits of highland dress if you want to go for a full outfit.

Geoffrey (Taylor) offer a fitting service type thing in London. They are also occasionally in New York, and of course they have offices in Edinburgh, Glasgow and Oban.

TFCK is a spin-off of Geoffrey (Taylor), which others somewhat less traditional touches, such as adding back pockets, for phones, PDAs and the like. They also do detachable front pockets for kilts which, having seen Howie (the chap who setup TFCK) wearing some on Saturday, I must say look pretty odd, but each to their own, so maybe some of you would like to entertain such options.

If you have flash (unlike me) you may be able glean something from their web site. I note that among other things they do aircraft-style belt buckles, which seems like a laugh, for those moments when you need to dump your kilt on the floor in a hurry :-)

The back pockets are done so that they can be folded away inside the the kilt, so that if you're wearing it as evening wear it doesn't interfere with the look of the thing. The front pockets are removable. The prices for those that are interested are:

The material is rather heavy for ties, but apparently it is possible to make a decent tie, but you may find that it takes somewhat more effort than usual to achieve a neat knot.

The prices quoted by Geoffrey (Tailor) are all inclusive of 17.5% VAT, which people exporting the their kilt may be able to reclaim.

[edit] Past and Future Orders

Please note: The at the time of the first batch the weavers setup cost was £300.00. The prices quoted for kilts etc that were part of the Initial order did not include that cost. On the other hand, those prices are based on a per-yard cost of £25.00/yd, whereas the price charged for the cloth can drop to as low as £17.50 if two full pieces (320 yards) are ordered. For the first order, we used that discount to cover most of the one-off costs (tartan design, setup & registration) with the balance being paid by Hands.com Ltd. as part of their sponsorship of Debconf. For subsequent orders, you'll need to cover the weaver's setup costs yourself, although they'll normally hide it in the £25.00/yd cost as long as you get at least on half piece (80 yards).

This information is preserved for comparison purposes with subsequent orders:

As you can see from the fact that we got two extra kilts at the last minute, they actually wove 13.5 yards more than expected (well they wove the right amount, but it shrunk less than expected when being finished) so in the end we could stretch to two extra machined kilts and be left with about 18" of spare cloth