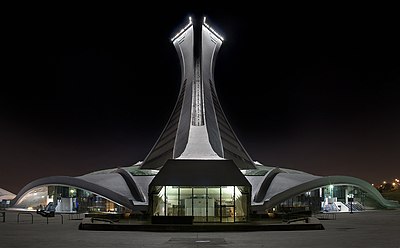 The tower illuminated at night 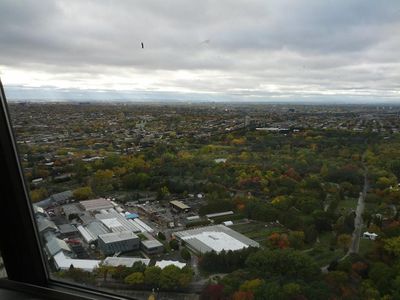 View of the Montreal Botanical Garden from the tower's observatory

The conference dinner will be Thursday August 10th.

It will consist of two parts, a special dinner served in the venue cafeteria, followed by a reception at the Montréal Tower.

A fine buffet-style dinner with table service and a free drink will be served in the cafeteria of the Collège de Maisonneuve at 18:30.

There is no extra cost to those who have received a food bursary, it's included. For users of the meal card, the cost per person is the same as for other dinners (7,50 CAD) and will have to be purchased in advance.

Following the dinner at Maisonneuve, all DebConf attendees are invited to a special reception held on the top floors of the Montréal Tower.

The reception starts at 20:00 and will end at midnight.

There will be music entertainment and free snacks. The bar will serve wine, beer and non-alcoholic drinks for a price.

The Montreal Tower is near the DebConf17 venue and is an approximately 10 minute walk. No motorised transport will be provided.

To get to the tower, you can exit the venue by the Bourbonnière exit and walk on Pierre-de-Courbertin street. Enter the site just past the Centre de médecine sportive and walk toward the back of the tower until you reach an entrance labeled Tour de Montréal - Observatoire.

We made a map showing the path.

The funicular inside will then take you to the top floor of the tower.

All in coffee and chocolate, this creamy oatmeal beer is as dark as it gets. Taste of roast and bitterness reminds a good espresso.

L’Ordre de Toasts is named after a marriage of Belgian and English malts that result in a peculiar toasted bread taste. Its sweet bitterness lets the malt express itself to the fullest.

This beer is an homage to the West Coast hops, growing Est of the Cascade Range. The result is one of the best IPA in Canada. A lemony and fruity bitter beer.

A richly malted, herbal Pilsner. Its crispy but very mild bitterness make it a refreshing beer.

An American IPA brewed with Cascade hops, making it both a very bitter and very citrusy beer. Bottled grapefruit.

Using wild yeasts and aging this beer for a month in oak barrels makes this beer unique. Bitter, a little sour with a malty finish.

With fresh hops from Alsace, this beer tries to replicate classic Belgian Tripels: strong, spicy with a sweet finish.

A wheat beer, cloudy and refreshing. Ever so slightly sour, this beer has been brewed with coriander and gives out hints of citrus.

Glutenberg brews gluten-free beer that are as good as "regular" beers. Our selection includes an American Pale Ale brewed with Amaranth and Quinoa, a delicious IPA, a red beer and a blonde.

A grey wine of Camargue, this rosé is made with Grenache, Merlot and Cabernet franc grapes. Not acetic, it is a slender, light-bodied dry wine.

This dry, light and fruity white displays a simple and medium nose. On the palate, its refreshing acidity and slender texture precede a medium finish.

This organic red wine is made entirely of Gamay grapes and had grassy notes, with hints of red fruits and pepper.

We'll have both Sprite and Coke for people who do not drink alcohol.

We will also serve four different flavors of Kombucha: