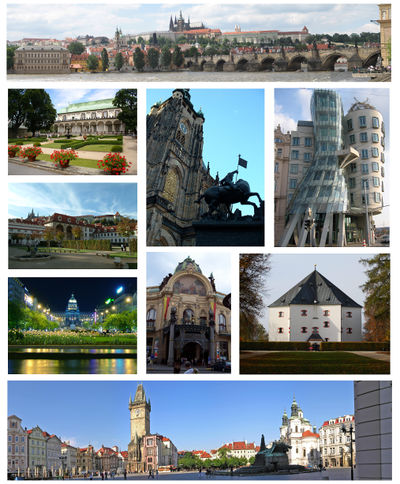 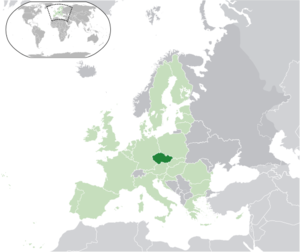 Prague is a city with a uniquely preserved historical center that is part of the UNESCO World Heritage List. It's capital of Czech Republic and 15th largest city in the European Union. The city is located in the middle of Czech republic on the banks of the Vltava River.

Prague has been a political, cultural, and economic centre of central Europe with waxing and waning fortunes during its 1,100-year existence. Founded during the Romanesque and flourishing by the Gothic and Renaissance eras, Prague was not only the capital of the Czech state, but also the seat of two Holy Roman Emperors and thus also the capital of the Holy Roman Empire. It was an important city to the Habsburg Monarchy and its Austro-Hungarian Empire and after World War I became the capital of Czechoslovakia. The city played major roles in the Protestant Reformation, the Thirty Years' War, and in 20th-century history, during both World Wars and the post-war Communist era. 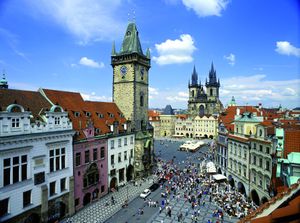 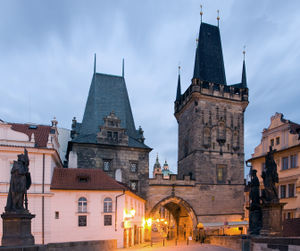 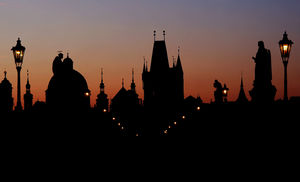 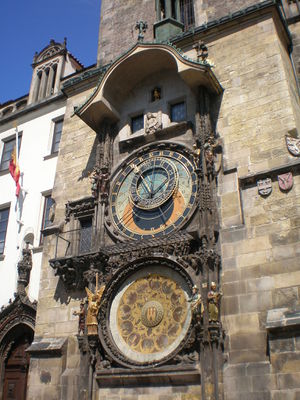 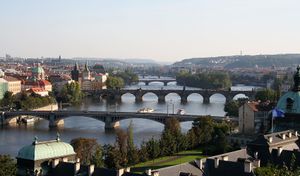 Bridges over the Vltava river, as seen from Letná.

Prague is home to a number of famous cultural attractions, many of which survived the violence and destruction of 20th-century Europe. Main attractions include the Prague Castle, the Charles Bridge, Old Town Square with the Prague astronomical clock, the Jewish Quarter, Petřín hill and Vyšehrad. Since 1992, the extensive historic centre of Prague has been included in the UNESCO list of World Heritage Sites.

The city boasts more than ten major museums, along with numerous theatres, galleries, cinemas, and other historical exhibits. It also has great ZOO, which is repeatedly ranked among the best ones in the world (eg. in by TripAdvisor in 2015).

An extensive modern public transportation system connects the city. Also, it is home to a wide range of public and private schools, including Charles University (Univerzita Karlova v Praze). Prague is classified as an "Alpha-" global city according to GaWC studies, comparable to Vienna, Seoul and Washington, D.C. Its rich history makes it a popular tourist destination, and the city receives more than 4.4 million international visitors annually, as of 2011. Prague ranked fifth in the Tripadvisor world list of best destinations in 2014. Prague is the fifth most visited European city after London, Paris, Istanbul and Rome.

Prague is really in the heart of Europe, you should not have troubles to get there from anywhere.

The nearest airport is Václav Havel Airport Prague named after our first non-communist president after Velvet Revolution. The airport has connections from most of European cities. Intercontinental flights are operated to few locations:

The airport is located within city limits accessible by public transport (bus lines 100, 119 or 191 during day and night bus line 510) or by more expensive taxi (we recommend using only official airport taxis).

There are trains coming to Prague from all neighboring countries, you can travel by train from Berlin, Vienna, Bratislava or Budapest. The train connection to west is not that good, so you might prefer bus (eg. Deutsche Bahn operated IC Busses from Munchen, Mannheim or Nuremberg).

Several bus operators connect Prague with whole Europe, these include:

Please add yourself if you are part of the team!

"The Type E socket (earthed) is standard in Czech Republic, Belgium, Poland, France, Slovakia and some other countries. It's compatible with CEE 7/7 plug (works in Germany) or CEE 7/16 "Europlug". (http://en.wikipedia.org/wiki/AC_power_plugs_and_sockets)

July to August, because the venue and accommodation is free during that time. 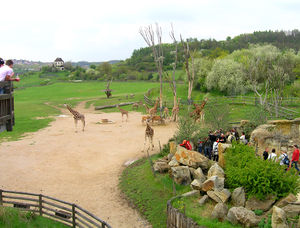 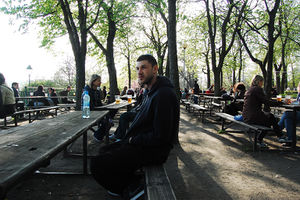 Citizens of EU countries, Iceland, Norway, Liechtenstein and Switzerland may stay temporarily within the territory of the Czech Republic without any permit whatsoever on the basis of a travel document or ID card. A notification obligation does however apply for this group for stays longer than 3 months. You must notify the pertinent inspectorate of the foreign police service.

Visas are NOT required for stays up to 90 days by citizens of these countries:

Visas are also NOT required in the following circumstances:

(a) Schengen Visa: Where travelers arrive with a Schengen visa, either directly into the Czech Republic or via another Schengen area country, no further visa is required.

The public transport network is very dense in Prague, so the transportation anywhere in the city is not a problem. We might be able to secure congress transport tickets for the RIPE participants that will make their transportation around the city absolutely free of complications or worries.

The public transport infrastructure (PID, Pražská integrovaná doprava) consists of a heavily-used integrated transport system of Prague Metro (lines A, B, and C - its length is 65 km (40 mi) with 61 stations in total), Prague tram system, Prague buses, funiculars, and six ferries. Prague has one of the highest rates of public transport usage in the world,[citation needed] with 1.2 billion passenger journeys per year. Prague has about 130 bus lines (numbers 100-299) and 22 tram lines (numbers 1-26). There are also three funiculars, one on Petřín Hill, one on Mrázovka Hill and a third at the Zoo in Troja.

All services have a common ticketing system, and are run by the Prague Public Transport Company (Dopravní podnik hl. m. Prahy, a. s.) and several other companies. Recently, the Regional Organiser of Prague Integrated Transport (ROPID) has franchised operation of ferries on the Vltava river, which are also a part of the public transport system with common fares. 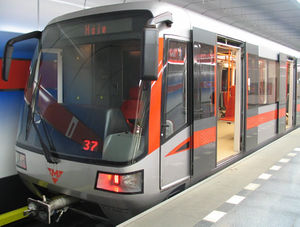 The Prague Metro has three lines, each represented by its own colour on the maps and signs: Line A (green, 17 stations, 17 km), Line B (yellow, 24 stations, 26 km) and Line C (red, 20 stations, 22 km). There are 61 stations in total (three of which are transfer stations) connected by nearly 66 kilometres of mostly underground railways. The metro service operates from 4-5 am until midnight, with about two- to three-minute intervals between trains during rush hours. Nearly 600 million passengers use the Prague Metro every year.

Prague has about 130 city bus lines (numbers 100-299) they usually connect outer parts to the traffic hubs such as metro stations. In outer parts there are 3xx and 4xx lines going outside the city.

There is also night service with 13 lines (numbers 501-513) which can get you from one end of Prague to another with 30 minutes intervals all night long. Additionally there are 6xx lines going out of the city (similar as 3xx lines during the day). 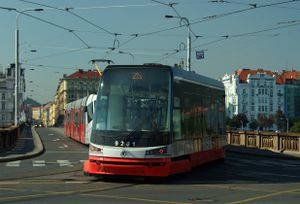 Prague has 22 day tram lines (numbers 1-26), the most famous being line 22 which goes through the city center and can take you up to the Prague Castle.

There is also night service (numbers 51-59) with central transfer point Lazarská in the center.

Car is definitely not a convenient transport in the city, but if you want to visit some other places in Czech republic, it might be a good option. You can find all major worldwide car rentals in Prague (all of them being able to rent you car in the city or at the airport):

Taxi services make pick-ups on the streets or operate from regulated taxi stands. It's recommended to call the taxi rather than taking one on the street (especially in touristic places like Old Town Square or main train station) as the on street taxis might want to charge you much higher rates.

Network connectivity is included in the deal with Czech Technical Faculty that will provide a wireless network with 1000+ devices connectivity full IPv4+IPv6 on University backbone.

Apart from great beer, you can taste specialties such as

Naturally, you can also try the Czech national dish of pork, dumplings and sauerkraut. 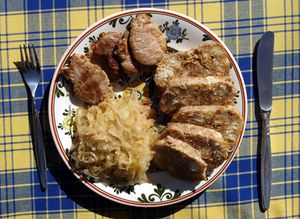 Czech cuisine has both influenced and been influenced by the cuisine of surrounding countries. Many of the cakes and pastries that are popular in Central Europe originated within the Czech lands. Contemporary Czech cuisine is more meat-based than in previous periods; the current abundance of farmable meat has enriched its presence in regional cuisine. Traditionally, meat had been reserved for once-weekly consumption, typically at weekends. The body of Czech meals typically consists of two or more courses; the first course is traditionally soup, the second course is the main dish, and supplementary courses such as dessert or compote may follow. For Czech cuisine are typical thicker soups and many kinds of sauces, both based on stewed or cooked vegetables and meats, often with cream, and baked meats with natural sauces.

Wine in the Czech Republic is produced mainly in southern Moravia, although a few vineyards are located in Bohemia. However, Moravia accounts for around 96% of the country's vineyards, which is why Czech wine is more often referred to as Moravian wine. Production centers on local grape varieties, but there has been an increase in the production of established international strains such as Cabernet Sauvignon. 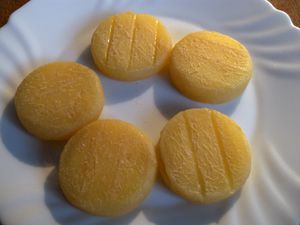 I took the same numbers as Montreal bid to make a comparable numbers.

Prague meets the current safety standards for Western European cities, but of course, you should observe the basic rules of moving around a highly populated tourist area.