The aim of this initiative during the DebConf16 Open Weekend is to showcase Debian running on various hardware doing different things, even unusual things. "Debian-Edu would be a good candidate to share and showcase as well as Debian Med and other such blends which run/use specific hardware which ties in debian, for instance the galileo package which just entered Debian archive just today which works with 'fitbit' devices"

For documentation on how to install, configure and use Debian on some specific hardware, see DebianOn project[1] 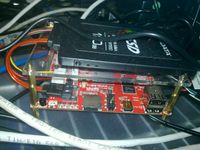 cubietruck in a reproducible build testing system, Many ARMed Monster of Reproducibility

[edit] So what's the deal with these 'open'-(ish) mobile phones?

Debian has for a long time been a good alternative OS for handhelds, it is just rare that they ship with 'pure' Debian pre-installed (for even a quite liberal definition of pure).

Steven Chamberlain: The Nokia N900 shipped in 2009 with a Debian-derived OS, and even this year I see recent commits to mainline Linux kernel and debian-installer for that device. It's possible to run pure Debian on these devices now. And Neo900 might happen someday...

Before having an N900, I had a Sharp Zaurus clam-shell handheld (which is not a phone), but pure Debian could be installed on that too IIRC.

[edit] The Pyra handheld (with LTE modem) by Dragonbox

Likely won't ship until after DebConf16, but the OS being developed for it is a very clean Debian armhf rootfs.

Paul Wise (pabs):The Pyra looks almost perfect but has PowerVR and won't have the same modem isolation/monitoring as the Neo900. I am really looking forward to the Neo900 existing (sigh PowerVR) but I'm not sure I will be able to afford it and many laptops are cheaper than it.

Maybe someone could bring a PocketCHIP to DebConf, if those ship anytime soon?

What would be interesting to see is probably wired and wireless routers which can debian minimalist and being used in various ways, as media/entertainment/home theatre server for one.

Please add any projects or requirements or anything you would like to see featured, and we will try our best to make it happen. Sponsors and local companies are also welcome to add offerings here.