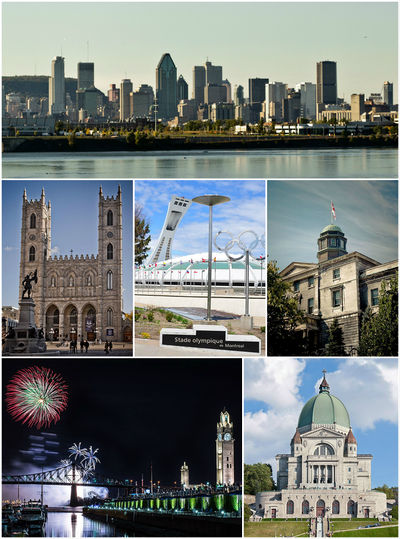 Clockwise from top: Downtown Montreal as seen from the Champlain Bridge; McGill University; Saint Joseph's Oratory; the Old Montreal featuring the Montreal Clock Tower and the Jacques Cartier Bridge during the Montreal Fireworks Festival; a view of the Notre-Dame Basilica from Place d'Armes; and the Olympic Stadium 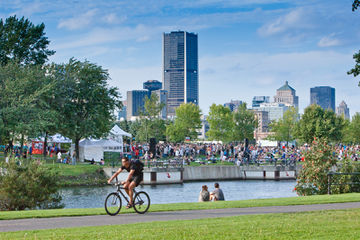 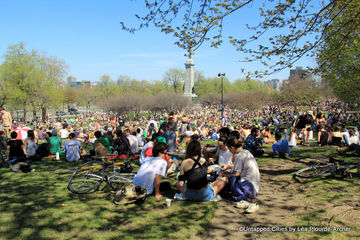 Tam Tam at Mont-royal on Sundays (picture from http://untappedcities.com/2013/05/27/sundays-montreal-guerriers-de-la-montagne-knights-warriors-mount-royal/) 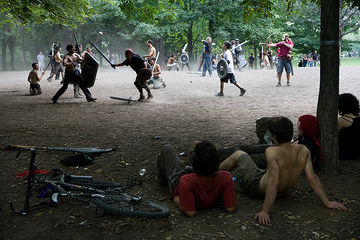 The Knights and Warriors of Mount Royal, Sundays in the summer (picture from http://larpforlife.wordpress.com/local-larp/) 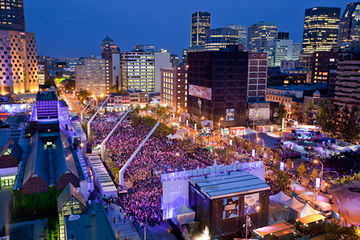 Montreal is a nice central city for the US as well as for Europe. Its weather has its up and down, but in summer is quite decent (not too hot). In winter, while cold, Montreal is close to lots of great locations for winter sports: skiing, snowboarding, hiking, etc.

With all its festivals, it can be a busy place, but there are definitely some periods where it gets much calmer, and even then, festivals are a great place to meet people and learn of new and interesting things!

Montreal is located on an island in the Saint-Laurent river, and is built around Mount Royal, a small hill which is a nice spot for summer activities as well, for low-difficulty hiking, or barbecuing in groups.

The transport system in Montreal is relatively well-designed. There is a (fairly cheap? at 24$?) weekly pass available for using the buses and subway system as well as the 747 bus which does the transport between the airport (located in the city) and the city center. Although the subway stations have been slow in building elevators to make it possible to avoid using stairs, all buses are equipped with measures to make them more easily accessible.

Security-wise, Montreal is a very safe city. No need to worry about walking alone at night or taking the bus or the subway. In all buses, women can ask the driver to get down between two stops if it makes them feel safer. Our hospitals are great and tap water is excellent. There is a strong LGBT community in Montreal and diversity is taken seriously everywhere.

If something ever happened to your electronic material, Montreal is home to lots of small and big electronic stores. One of the biggest and most diverse store is Addison. From resistors and PCB boards to duct tape and audio cable, everything computer related can be found there.

All the information for visiting Canada, and to apply for a visa online is available here

The nearest airport is codenamed YUL. It is located within the city on the mid western section of the island (see on map). Going from there to the downtown area can be achieved by a dedicated bus line (line number 747) for 7 CAD$ or by taxi which is more expensive.

Please add yourself if you are part of the team!

[edit] Venues which fell through

"The 5-15 socket is standard in Canada, the United States, Mexico and Panama. It is also used in Central America, the Caribbean, northern South America (Colombia, Ecuador, Venezuela and, as a legacy, parts of Brazil), Japan, Taiwan, the Philippines and Saudi Arabia. This socket is recommended in IEC standard 60906-2 for 120 volt 60 Hz installations." (http://en.wikipedia.org/wiki/AC_power_plugs_and_sockets) 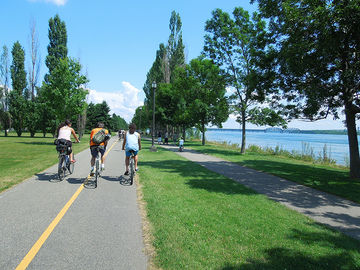 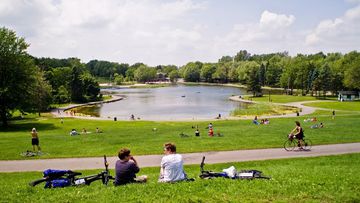 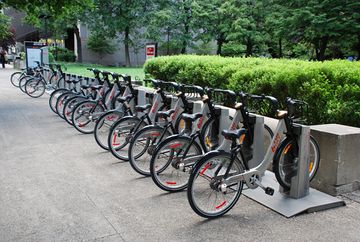 Bixi in Montreal by Adam Fagen

While the summer in Quebec can be quite hot, a picnic would not be the most appropriate place for cheese to be happy. However, Montréal is full of churches, and some rent their basement for events. A such fresh place would be particulaty enjoyable for the party.

- The Concordia church is an option http://www.concordia.ca/offices/chaplaincy/loyola-chapel.html

- The "Église Saint-Enfant-Jésus du Mile End" is another one http://www.diocesemontreal.org/leglise-a-montreal/nos-lieux-de-culte/nos-paroisses/paroisse/saint-enfant-jesus-40montreal41.html

Information for people with disabilities can be found here. All buses in Montreal are wheelchair accessible. Sadly, the Orange line is the only subway line that can be called wheelchair accessible. Even there, only a few subway stations are equipped with elevators. To palliate to this, STM offers door-to-door public transit service called Paratransit. Paratransit is accessible to people visiting Montreal from outside the Quebec province and globally uses the same fares as the rest of the public transportation system.

The Montreal Metro consists of four lines, which are usually identified by their colour or terminus station. The terminus station in the direction of travel is used to differentiate between directions of travel. The busiest line is the Orange Line, while the least is the Blue Line.

The STM bus service operates well over 200 bus routes serving a number of different markets. These routes serve an average of 1,403,700 daily passengers each weekday.

On August 30, 2010, the STM introduced the 10 Minutes Max network. This "network", overlaid on both the local and express networks described above, schedules buses at a maximum headway of 10 minutes, between 6 a.m. and 9 p.m., Monday to Friday, on the 31 of the STM's busiest bus routes. A few routes support that maximum headway only in the customary peak direction mornings and afternoons.

There is a free city-wide network. Local team have good connexion with the 'Ile Sans Fils' organisation.

Montreal is a very culturally diverse city, as such, many varieties of food, including vegetarian and vegan, are readily available. The local staple food is poutine.

There are many cheesemakers in Canada and Quebec. The Canadian Cheese Directory lists all the cheese available in the country. The Quebec section may be of interest.

Several restaurants offer vegan food in Montreal. The VeganMontreal blog lists some of the best places with reviews.

Please take a look at our status page to know what changed recently and see how we comply with the priority list.