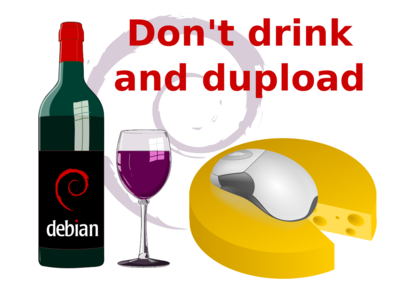 The party will be held in the youth hostel

Cheese is Good For You. Wine also helps. This C&W is the 11th official DebConf Cheese and Wine party. The first C&W was improvised in Helsinki during DebConf 5, in the so-called "French" room.

Cheese and Wine parties are now a tradition for Debconf. The event is very simple: bring good stuff from your country, preferably cheese, wine and|or any other good stuff that can be drunk or eaten. Even if you don't bring anything, feel free to participate: our priorities are our users and free cheese.

Some bits from previous C&W:

For people who would like to bring some cheese to the C&W but couldn't bring it from ${HOME}, we'll organize at least one cheese trip to a grocery store.

Can I participate to C&W (AKA eat and drink) if I couldn't bring anything?
A: Sure you can. No cheese control at entrance (however, see notes below). No "secret cheese cabal" checklist. But you can certainly find something to bring. No cheese? Maybe some nice bottle of <insert favourite $beverage here>. Or some nice thing to eat from your place. Whatever. Also please check the Cheese Trip item above.

I couldn't bring anything from $HOME but would like to participate. Is there a way to do so?
A: You can help us! C&W helpers meetings will be indicated on this page and announced on debconf-announce.

I forgot what is it that I brought !
A: We'll try to track back what it is that you brought with you.

Anything I should do when bringing goods?
A: Please make sure it is labelled, either from its packaging or by a readable note from you.

[edit] What did you bring?

Please add your entry in alphabetical order. Please choose one, two, or exceptionnally three, representative cheese from your place (list of cheeses). It is recommended to target pieces that can be cut in about 10/20 slices/portions/whatever each.

We will try to label stuff based on the information pasted on this list, so please put everything here!

(countries list not exhaustive: this is a copy/paste from last year's C&W)