This is the proposal for holding DebConf14 on Puerto La Cruz, Venezuela.

If you are a Local Team Organizer and would like to add something to the proposal, please subscribe to debian-ve@lists.riseup.net and send your idea there. Someone from the Media Committee will put it here in the right place. Thank You.

You can watch the DebConf12 bid presentation here.

There is a very active Free & Open Source Software Community in Venezuela. Several groups that conduct evangelization, support, and development activities in the country are willing to support every single aspect of the DebConf organization.

The following people have confirmed its involvement in the proposal. The majority of them have expirience organizing previous proposals of DebConfs in Venezuela and/or Cayapas Canaima (Debconf-like local event).

Some of these organizers are already doing plans for attending DebConf13 and are willing to help as logistic personnel.

"Paseo Colón" cross at dusk.
Puerto La Cruz (map) is a port city, surrounded by the Mochima National Park and base of the Puerto La Cruz Refinery, one of the largest in the country. As a coastal city of the Caribbean, you should expect hot temperatures and no rain at the middle of the year (bring your bermudas!).

Puerto La Cruz is a city designed for tourists. Several large hotels are scattered all around the city, ensuring maximum availability for visitors. The Mochima National Park is spread over an area of 94,935 hectares and its western region is surrounded by some really amazing beaches. Other places such as Playa Conoma, Isla de Plata, Playa Arapito and Isla Arapo are also known for their immaculate beauty. 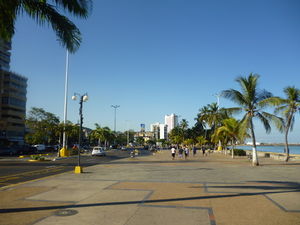 City streets.
Margarita Island, Coche Island, and other minor islands are relatively near, easily reachable through boat/ship, which make an excellent option for the Day Trip. Watch some of the promotional videos:

Puerto La Cruz is also an academic city. It has several universities that teach technical, engineering, computing and/or information technologies careers, making its students an ideal audience that would potentially come to DebCamp & Debian Day activities at the (proposed) venue, or even host some of the talks. These universities are near the (proposed) venue:

The General José Antonio Anzoátegui International Airport (map) is located in Barcelona (10km southeast) and it serves Puerto La Cruz. It receives direct flights from Miami and Panama through Avior Airlines. A cab should have no problem in taking you to the venue (30min travel).

Simon Bolívar International Airport (map) is the principal Airport (260km east). It has connections with major destinations in Europe, Asia and America. Then you can take a direct flight to Barcelona or take a bus (6h travel).

We are likely to rent several buses to depart from Simon Bolívar Airport (Maiquetía) and General José Antonio Anzoátegui (Barcelona) at different hours of the arrival days. The bus can take 6h from Maiquetía and 30min from Barcelona.

Venezuela has amazing natural resources that make it an excellent touristic destination. People, government and private efforts are well aware of this, which means we will do averything at our hands to make you feel confortable.

Below there is a list of the countries that do not need a visa to enter Venezuela. If your country is not listed, you will have to go to the nearest Venezuelan Embassy or Consulate to get a tourist visa. The procedure of getting a tourist visa implies collecting some personal documents, paying a fee and in some cases, show details and reservations of the event. It might take 1-2 weeks to issue, but you can always "rush it" by paying an extra fee, in which case your visa will be issued within 72 hours.

More information about embassy and consulates near you in this link (spanish).

Common items for a DebConf atendee have no regulations. However usual regulations apply to explosives, flammable liquids, toxics, radioactives, corrosives, weapons, knifes, and other dangerous objects.

Venezuela has a currency exchange control. It is illegal for people to exchange dollars, euros, other, for bolívares (official currency), unless is done through official institutions. In the past, the country had large losses of money due to the flight of capital. The government implemented a currency exchange control to protect the internal cashflow. This might become an obstacle in our logistic.

In consecuence, there are a couple of plans that might help to overcome this situation:

DebConf organization may transfer the payment of the hotel costs directly to them. The hotel has accounts outside of the country that can receive this type of payment. Money for the other aspects of the conference might be transferred through options 2 and 3 or through local sponsoring.

There are several middle range companies that have operations outside the country, and thus, have accounts in dollars. Debconf local organization might partner up with one of these (travel agencies, FOSS related startups, ...), for them to receive dollars outside and give us bolívares in Venezuela.

Since last year, venezuelans can open accounts in dollars through local banks. One condition to achieve successful transfers is that a company (legal entity) must open the account.

Primary language is spanish, but as in any touristic city, many people are very well aware of the need to understand and communicate with foreign people. Personnel of the proposed venue are bilingual. You'll find it easy to get what you need.

Smoking is prohibited on public spaces. However, the proposed venue has smoking and non-smoking areas well demarcated.

We have selected Hotel Venetur Maremares as our first option. To minimize transport logistic and cost, we decided to hold both acommodation and conference facilities in the same place. As pointed out in the DebConf12 presentation, the local team has a strong relationship with government institutions, including Ministry of Tourism and Ministry of Science and Technology, maximizing the possibilities of negotiating a large discount, and as many sponsoring as we can. 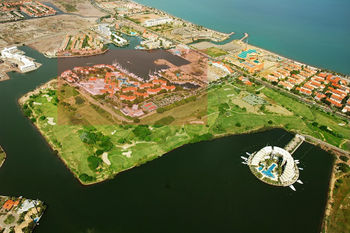 Location of Hotel Maremares (red shade).
Hotel Maremares is part of a government chain of hotels called Venetur that is located to the southeast of the city (maps). Maremares has a full capacity of 493 rooms, 11 conference rooms, two restaurants and many other useful services:

Maremares double rooms.
Double rooms are 100USD per night. A possible sponsoring by the government might reduce costs to 60-70USD.

The conference rooms are 100mt away from the sleeping rooms.

Maremares double rooms.
The hotel has the following capacity:

Making the conference in June-July, assures the hotel will be empty.

Yes, all personnel are bilingual.

The hotel reception can handle check-in, check-out and related. There will be an info-desk for the other debconf activities. 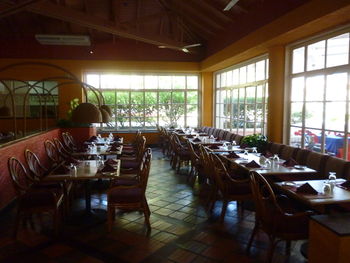 Part of the restaurant.
Yes, children also. There will be special activities with Canaima laptops and proper instructors.

Yes. The following hotels are 5min from the venue:
Other hotels around the venue have to be located and contacted.

There are two rooms specially designed for handicapped people. All the hotel is structured and demarcated according to accessibility standards. 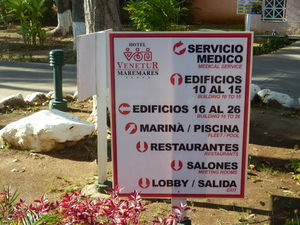 Maremares locations.
It's all in the same hotel, you'll just have to walk a few meters to reach each location.

The hacklab can stay open 24/7 without requiring a special payment or any other additional logistic. 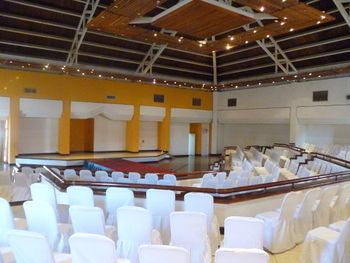 Chairs are movable, however the capacity of the rooms will ensure that everyone fits in.

The hotel has according signalization, and people with visual impairment should have no problem following the tile signalization on the floor. There's also ramps, accessible bathrooms, and trained personnel.

There are ramps all over the hotel.

Not quite. The on-site contact team has some experience based on research and documentation.

Not yet. It can be arranged with anticipation.

There are two to four speakers, connected to a simple mixer on each conference room.

Two or three per room.

The hacklab will be inside the hotel, with standard security guards in the entrance. Additional guards can be summoned upon request.

There should be no food and/or alcohol inside the conference rooms. However, the rest of the hotel facilities can be used for eating/drinking.

There are three mayor malls at 5-10min (walking) from the venue.

Breakfast is included with the room price. Lunch+dinner are around 20USD per person per day.

Yes, you would walk a couple meters.

Traditional venezuelan food. However, there are several chinese, japanese and arab food stands in the streets of Puerto La Cruz.

We can get vegatarian and vegan food.

Chefs can prepare as much as we request.

The conference rooms and hacklab have to be wired and set up to ensure maximum functionality. Wireless connections are already put in place for normal hotel operations.

A 20Mbit connection can be sponsored by CANTV, a government provider.

The entire hotel has wireless links.

No, but we might be able to implement this with some anticipation. 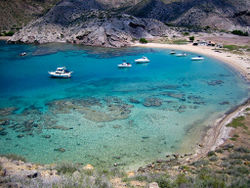 As said before, Puerto La Cruz is next to the Mochima National Park. The pristine and calm waters of Mochima are loved by many people who are amazed with the beauty and uniqueness of the seabed hosting mangroves, corals and colonies of sea anemones, shrimp, fish, crabs, and dolphins that make the sea a kind of wonderful zoo. Practitioners of diving, swimming, sailing, wind/kitesurfing, kayaking, rafting, fishing, paragliding are regular visitors to the shores and islands of Mochima.

Mochima has plenty of small restaurants where most dishes are prepared with seafood. Craft sales and famous coctails are also offered in this population. Locals provide services of sea transportation to the beaches that are difficult to reach by land. 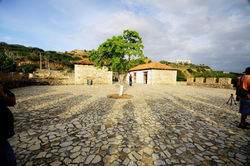 There are several options to Day Trip. One possible trip would be visiting Fortin La Magdalena on Cerro El Morro (Video, spanish). Fortin (stronghold) La Magdalena was an ancient castle built by the spain crown in 1798 to defend the commercial waterway of Neverí river. Thanks to its strategic position, it was commonly attacked by pirates and patriot forces, fighting for independency. Later, on 1819, General Simón Bolívar and Rafael Urdaneta took the strognhold on a bloody battle. A couple of meters from the Fortin, there is a field where we can do paragliding (Video).

Another option is to rent a boat to make a tour through several of the park islands, where adventure activities can be done, or, if you prefer, you can just sit and swim. As said before, diving, swimming, sailing, wind/kitesurfing, kayaking, rafting, fishing, paragliding are available activities to do on the islands.

Little boats (peñeros) depart from docks at 10min from the venue to the islands of the park at a price to be examined. There would be small fees to rent equipment for scuba diving, wind/kitesurfing, kayaking and rafting.

We have spotted a number of local sponsors that traditionally help the Free Software Movement in Venezuela and will probably sponsor DebConf14:

Not yet. Institutions in Venezuela manage their budgets on a yearly basis. We will start the formal sponsoring process on January 2014. However, contact meetings should start when the selection process ends.

Low season in Puerto La Cruz ends in July, so DebConf14 should be appointed to be between June and July. This guarantees the prices will be low and enough rooms are available.

If the conference is made on the proposed dates, there should be no problem. However, if we have unexpected issues, the 2nd Option for the venue must be considered.

No, we should wait the selection process to end so that we can start formal operations on this.