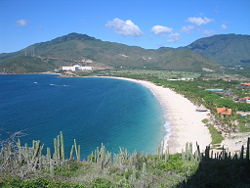 This is the proposal for holding DC10 on Margarita Island, Venezuela. There is a large and very active FOSS community in Venezuela, as well as a strong local team on the Island. Besides there is a great atmosphere for working and networking in one of the most vibrant locations available for a DebConf. Venezuela offers beautiful beaches and entertainment offerings at the Island for all participants.

Are you suggesting a city, a town, a village, a spa in the middle of nowhere?

Margarita Island is the largest island on the eastern coast of Venezuela. The event would take place in the Hotel Hesperia Isla de Margarita near Juan Griego. The whole island is connected by roads and you can move to any point of the island in less than 30 minutes. Other photos of the Hotel can be found here.

How many people live there?

Over 400.000 residents live on Margarita Island.

How easy/convenient is the proposed place to get all strange and regular kinds of hardware?

Electronic/electricity shops / Computer stores. A duty free status was granted on 19th August 1966 and then upgraded by law to free port on 1st April 1975.

A view of the sea

There's a large mall (Sambil Mall) and some computer/electronic shops in the 4 de Mayo and Santiago Mariño Avenues.

There are lots of stores and big malls. Margarita is a duty free zone where people don't have to pay taxes. This saves visitors and locals at least 9% of the prices.

Porlamar is the main town. It is the largest city and the commercial hub of the island. Here you will find numerous shops, restaurants and banks, and all, duty free. You will also find restaurants offering all types of cuisine, as well as bars.

How easy is it for handicapped people to move around there?

Margarita has hotels, malls and public transportation with some facilities for handicapped people.

Which is the nearest airport?

The island's main airport is the Caribbean International Airport "Santiago Mariño". Transport to and from Margarita is by air via Caracas international airport. There are also flights directly to Margarita from European countries such as the UK, Holland, and Germany.

Another option is by the modern ferries from Puerto La Cruz, Cumaná and La Guaira.

Are there any cheap airlines flying near the chosen city?

Aserca and Laser are the less expensive national airlines flying from SVMI (Maiquetía International Airport, Venezuela's main international airport) and tickets can be bought in VEF, which is far cheaper than paying for them in USD or EUR.

How long does the trip from the airport to the venue take?

Are there any import regulations, which might affect DebConf? (e.g., a limit to number of notebooks / DVDs / other media you can bring in; hard regulations for money transfers; etc.)

Language: Do most people speak English? How hard is it for a foreigner to find their way around?

Margarita is a tourism-centered island, so the vast mayority of hotel employees speak english and spanish.

Coche Island
Coche Island: It is located in the south of the Island. It has an area of 12km long and 5 km wide, its average temperature is 28 ºC, it is characterized by its landscape, low hills and coastal scenery.

Among its main attractions there are beaches, native people, dancing and fun folk festivals.

Entry requirements: A valid passport, EU and North Americans and many countries of Latin America and Asia do not need to obtain an entry visa (visas are issued by immigration officers when entering the country)

Medicine and Health: There are several public and private clinics, hospitals, ambulance services and many doctors on Margarita Island

Climate: There are no pronounced seasons on Margarita Island. The temperature on the Island varies from 32 º C in September to 24 ºC in January. The sun on the Island is stronger than in other locations with similar geographical position. (hurricane free)

Extension: The island is about 1,000 km² big. Roads are generally in excellent conditions, the largest north-south distance is 33 km, the longest east-west distance is 64 km. Margarita map

Currency Change: Exchange transactions must be made in Commercial Banks or Money Exchange at the official exchange rate.

Credit Cards: Visa, MasterCard, Diners Club and American Express are accepted in most stores, restaurants, hotels, bars and night clubs, as well as traveler checks. Outside the larger cities, a supply of Bolívares is recommended.

Water: It is preferable to depend on the everywhere available bottled or filtered water.

Transportation: Public transportation will take you everywhere on Margarita Island at a really low fare.