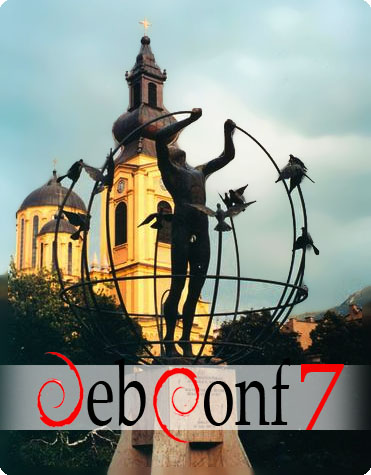 Sarajevo is the capital of Bosnia and Herzegovina. There's much to do and see in the city famous for it's cultural diversity, ranging from symbols of our incredibly rich history to stunning landscapes or numerous pubs/restaurants/coffe shops. The city that hosted the 1984 Winter Olympic Games is the home of the Sarajevo Film Festival, the largest one in this part of Europe. Expect a hot summer here - 35°C (95°F) is not uncommon during the day, but it pays off in the evening when its hard to stay indoors.

So far, we have two major european hubs connecting Sarajevo directly with the rest of the world, those are Frankfurt (with BH Airlines) and Budapest (with Malev Hungarian Airlines). Malev offers easy connectivity from New York and Toronto, as well as from China and Japan at an affordable ticket prices. Also, there are low bugdet airlines for european Debian Developers and other attendees to Split from all over Europe and then, one could take the bus to Sarajevo, which is only 5 hours ride. This could reduce travel costs significantly.

Here is a list of regular flights to SJJ:

Cheap train connections include the entire European railways, trains coming from E.U. to Ljubljana (Slovenia) from Austria then to Zagreb and finaly to Sarajevo. Also from Budapest (Hungary) to Sarajevo directly every day. One cheap solution from U.K. is to take a flight with, say, EasyJet to Budapest and then by train to Sarajevo, and that would be around 200 EUR return ticket (plane+train) solution. Of course, for those who want and healty enough to travel. From Greece there is also a train option from Thesaloniki to Belgrade and then to Sarajevo, quite cheap.

Also the Hotel offered us a minibus capable of handling 10 people in wheelchairs as well as others, so the need for the TAXI service is off, but if you'd like to check out TAXI prices, they're in the Expense Summary below.

Sarajevo’s culture is represented in various ways. Numerous cultural festivals occur every year, such as the Bašćaršija Nights, Sarajevo Winter Festival, and the Sarajevo Jazz Festival. Numerous theatres are present in Sarajevo as well, such as the National Theatre of Bosnia and Herzegovina. The first ever Bosnian opera was held in Sarajevo in 2003. Historically, Sarajevo was home to several famous Bosnian poets and thinkers during the times of the Ottoman Empire. Nobel Prize winners Ivo Andrić and Vladimir Prelog are from the city, as was academy award winning director Danis Tanović.

Sarajevo is also home to the Sarajevo Haggadah, one of the oldest surviving such texts, originating from the 14th century and brought by Jews fleeing the Spanish inquisition. As of late, modern art has flourished in the city as well.

Here are some important touristic places in Sarajevo:

[edit] Examples of our cuisine

Here are some traditional meals and drinks in Sarajevo.

Bosnian national specialty made on grill is the famous Bosnian brand internationally recognized. Those are small dumplings made from minced meat, mainly veal, mixed with garlic, than onion and different spices. Average length of one ćevap is about 5 cm. Ćevapi are grilled and served in pita bread previously dressed by gravy with chopped onion aside. According to tradition ćevapi are served in ćevabdžinice located, when we talk about Sarajevo city, mainly on Baščaršija.

Sarajevsko pivo - Sarajevo Beer or for some, Sarajevo bear ;)

europroNET ISP (http://www.europronet.ba) is willing to provide wireless 4x10 mbps (some 20 mbps average) connections as main or backup Internet link with 24/7 tehnical support. Hotel has already some network infrastructure from the europroNET ISP.

We should not be traffic-shaped, thus should we use our own shaper - we could.

Awesome solution: Gigabit network link. Can we support that? (The most we can handle is about 35-30 mbps) Boring solution: Offline editing. Leave the raw DV on the RAID, review heavily compressed video, and perform simple cuts with scripts running on the RAID server. (This would take some time for the team)

To help you review your expenses here is a roughly estimated table of prices: