Mechelen is a medieval city in the heart of Belgium. It's not very large (80k inhabitants), but large and old enough for there to be lots of interesting things to do in Mechelen:

Brussels National Airport is 20km away. There is a train station below ground under the arrivals and departures halls, which feature direct trains from the airport to Mechelen in around 10 minutes. Alternatively, one could also take the bus; this would take about an hour.

If coming by high-speed train from elsewhere in Europe, one would go to either Antwerp Central station (thalys) or Brussels South/Midi (Eurostar, Thalys, ICE, TGV), and take a regular train from there to Mechelen. This will take between 15 and 30 minutes, depending on the exact kind of train you'd take.

For those coming by car, you would drive to E19 from which you would take exit 9, "Mechelen Noord" (mechelen north) or exit 10, "Mechelen Zuid" (mechelen south). However, note that there is no free parking in Mechelen.

Having said that, the youth hostel is right next to a parking lot and does have some reserved parking space as well.

In the unlikely event someone would want to come by boat, there is a small marina in the river not too far from the venue... 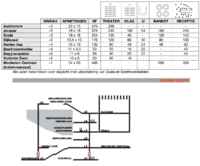 This price is a compound figure, consisting of renting all the rooms rather than just some of them, which Lamot also allows should we want it (though we recommend against that). It also includes wages for their technical staff, who operates their technical equipment (we have to use that according to their standard rules, but we haven't asked for an exception; it's possible that we might get it). Full details on the pricing available on request (since this is not on the Lamot website, I thought it improper to place it on a public wiki).

The building contains several rooms; we would be able to use one as a NOC room or the likes, and there is also one room which is usually used for receptions or walking dinners, and which would be an excellent location for the cheese and wine party.

The city government has agreed to assign one of the days that they have a right to through their agreement with Lamot to DebConf, should we win the bid.

These three hotels have offered us a single price, at a reduction from their normal rates.

Prices (and estimates) on the checklist page.

The city government has directed the city's tourist services to work with us in preparing a decent daytrip, if we win the bid.

Have helped out so far:

Wouter, Kurt, Ivo, Jeroen and Luc were at debconf13 (and several others); I think Bart was at debconf9.

Have shown interest to help out in the future, if we win the bid: