Portland has a thriving local Free Software scene and is home to over a half dozen active Debian developers. There are several active LUGs in the area, including the venerable PLUG, and the Ubuntu Oregon Loco. Portland State University also has strong ties to Debian, and runs much of the infrastructure for their engineering college on Ubuntu.

The current active volunteer organizers are:

Portland is home to a vibrant free software/open source community, additional volunteers will be drawn from: 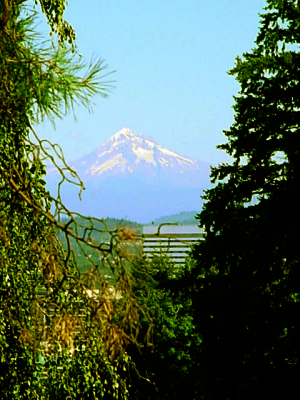 The city of Portland, Oregon has a population of approximately 600,000, with just over 2 million people in the Portland metropolitan area. A (humorous) taste of local culture may be found in episodes of "Portlandia". Historical weather and precipitation trends are very favorable for this time of year, sunny with highs around 25C/80F and lows around 14C/58F, so strolling through town should be quite pleasant during the day and night. Logistically it should be a straightforward location for hosting a DebConf:

As attendees of DebConf 10 in New York will tell you, the US is very friendly to foreigners. And further, you'll find most people in Portland fiercely proud of their diversity and welcoming to visitors.

Portland, OR also has no sales tax.

For beer drinkers, Portland is home to 38 distinct local breweries earning it the nickname "Beervana".

The same visa requirements apply to Portland as applied to DebConf 10. For DebConf10, Some people expressed concern about US immigration presuming the authority to seize laptops on entry. Not only was this not an issue in practice at DebConf10, the 9th Circuit Court recently rejected this interpretation of the US Constitution. This means that laptop seizures should not be even a theoretical issue for anyone entering the US through Seattle, Portland, or any airport in California.

Most of those things should be OK to bring in unlimited amounts for personal use. There are amounts allowed for duty-free gifts, plus regulations on typical things like alcohol/tobacco/fruits/vegetables/dairy/meats.

English is spoken everywhere. Spanish is also widely spoken, and most public signage is bilingual English/Spanish. Other less common minority languages in Portland include Vietnamese, Japanese, Korean and Russian. French and Italian are used mostly for pickup lines in bars.

Smoking is prohibited in some areas of the Portland State University campus: all university buildings, balconies, patios, awnings, overhead walk ways, covered walk ways between buildings (which covers main entrance to the Smith auditorium), stairwells, vehicles, parking garages and any other enclosed areas, and within 7 meters of any doorway or marked air intake. One section of the campus, the Urban Plaza, is an entirely tobacco free area (this section is *not* adjacent to the auditoriums, hacklabs, or sleeping quarters). In between buildings there are random ashtrays, with only a few clearly marked no smoking areas. 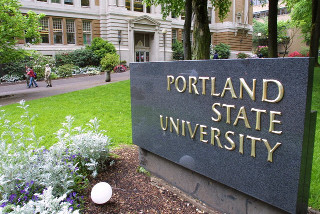 Our venue is the Portland State University conference facility, located at 1825 SW Broadway, Portland OR 97201.

The facility offers multiple different rooms and configurations, ranging from conference room seating for 15 up to auditorium seating for 600. General pricing is listed in the online pricing page and room descriptions.

Our target package is USD 7200/week, which includes:

If attendance is higher than expected, we will have the option of reserving more or larger rooms closer to the date of the event (subject to availability). 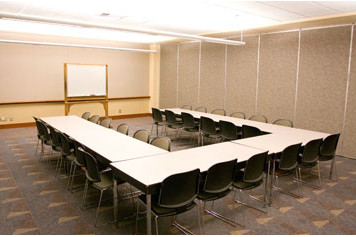 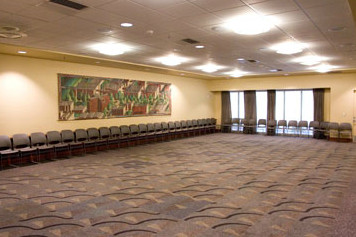 * How far away are the locations from each other? (auditoriums, hacklabs, restaurant, sleeping quarters, info desk)

Hacklabs and talk rooms would all be located in the same building. Sponsored accomodations in The Ondine and The Broadway are < 250m away by foot. Paid accomodation options in the area include the University Place Hotel, 800m from the venue by foot. The university campus is in the heart of Portland, so there are numerous dining options available, including on-campus dining service that can accommodate large groups.

The building has limited hours; a 24-hour hacklab might be negotiable with additional costs for security. There is also common space in the residence hall that might serve as a night hacklab.

Yes. Recommended rental package includes assumption that the auditoriums will be merged for the plenary opening and closing sessions.

All furniture is movable and can be adjusted as needed, however fire codes will most likely prohibit exceeding the stated capacities of the rooms.

Having the conference venue at a public university in the United States ensures compliance with ADA. Speakers will need to be made aware of concerns of vision or hearing-impaired attendees to ensure their presentations will accommodate them as well.

Yes. Our contact for the accommodations portion of the venue was able to adequately describe ADA-accessible areas, ongoing improvements and results of inspections. Handicapped areas are clearly labeled, and staff is trained to assist when necessary. Patty was present for the conversation regarding handicapped accommodations.

Base price for three meals (breakfast, lunch, dinner) at the conference is $20/person/day. It may be possible to negotiate a better rate. The cafeteria is open to attendees who are not staying in sponsored housing. Catered coffee service is available in the venue for an additional fee if we want to consider this.

The above meal price is for the cafeteria in The Ondine (residence hall), which is two blocks from the venue. The layout of the city also ensures plenty of restaurants, food carts, and dining facilities are within an easy walking range.

Portland has one of the highest rates of food allergies, and as such, is very sensitive to dietary requests and restrictions and a wide variety of restaurant and food cart options. Cafeteria dining would want to know about dietary restrictions in advance in order to prepare appropriate quantities of food.

TBD, but probably not.

Network connectivity is considered a basic living essential in Portland. You'd be hard-pressed to find anywhere in the city that ISN'T wired or wireless.

PSU campus not only has wireless that covers all the buildings, it also covers the parks adjacent to the student union.

PSU has a large network infrastructure with a big pipe.

The PSU campus is already fully covered by Wifi.

Any identified needs can be addressed if we have sufficient lead time. The PSU network has been sufficiently robust for prior conferences.

Likely there is no shaping used nor available.

Yes, the campus wireless and network are already up.

Small office-sized, close to proposed meeting rooms and about half the size. The room can be locked with access to limited persons.

Air conditioning is common in all public buildings in Portland. All considered venues have environmental controls, which will be handled by the building maintainers.

Venue has been used for Linux conferences recently and is confident in their ability to handle streaming video as well as personal video and server equipment. They will have staff on hand to help our video team and speakers with necessary video and audio controls, and have assured us they are used to requests of streaming video for the conferences they've hosted in the past and were able to easily accommodate those requests. 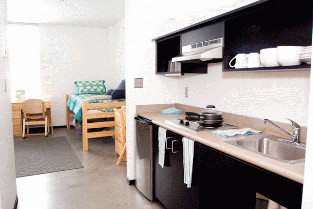 * How much does it cost per person per night?

The Broadway also has one of the largest eco-roofs in the city of Portland. We will try to arrange a [tour] of this as part of DebConf.

The native language in Portland, OR is English. Spanish is also a common language and an interpreter can usually be found easily.

For general conference information, yes, there will need to be a Debconf info-desk to help attendees. For room registration and conference concerns, however, the university will handle key allocations and registrations.

Each attendee will have their own room key.

Yes. A benefit to hosting in downtown Portland is the number of hotels near the waterfront that would be in easy walking distance to Portland State University's campus.

There are designated handicapped-accessible rooms in the residence halls. Numbers TBD, but expected to be sufficient for our requirements. 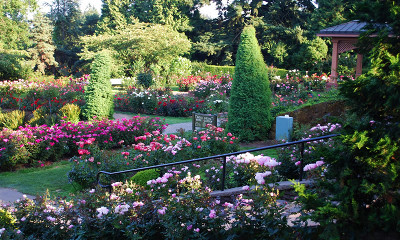 * What activities can be done during the free time?

There are Gardens galore to explore: Portland International Rose Gardens, Japanese Gardens, Portland Classical Chinese Garden, Waterfront Park in downtown Portland among many, many others.

A short Light Rail ride away is Powell's City of Books and Powell's Technical Books just across the street from them.

There's also The Oregon Zoo, The Children's Museum and OMSI.

Every weekend, there's the Portland Saturday Market that runs Saturday (and Sunday), as well as several Farmer's Markets in the area throughout the week.

This is a short list of possibilities. If Portland is chosen for the DebConf location, many more suggestions will be made. 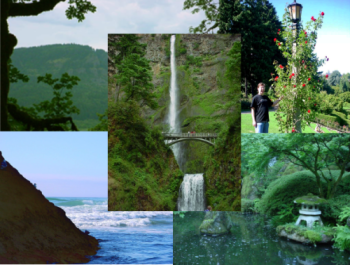 The trouble would be deciding *what* daytrip we would be planning. Options include visiting Mt. Saint Helens, visiting the Columbia River Gorge, visiting the Oregon coast, visiting local wineries or breweries (or both! We don't discriminate!), making a trip up to Mount Hood for skiing or hiking, or visiting one of the many, many parks for hiking and nature walks.

One very possible day-trip plan would be a short bus ride out to the Columbia River Gorge to visit the Columbia River Vista House for a taste of Oregon history and settlement, then ride along the Scenic Highway to Multnomah Falls for light hiking or just enjoying the waterfalls. If feasible, there would still be time for another short bus ride to Timberline Lodge on Mount Hood for more hiking or just lodge dwelling before returning to downtown Portland.

Expenses would include transportation to and from the day trip area and food. The parks won't have admission, though some areas might (The Oregon Aquarium at the coast, for example). Wineries and breweries might charge for large group tours. Once the team decides on an appropriate trip, we can determine costs.

Among local sponsors we'll approach are Free Geek, Puppet Labs, Intel, Oregon State University, OSDL, and the City of Portland. We have Portland State University faculty sponsorship for the event, which makes us eligible for a discounted rate for university facilities.

We have only approached a couple of the prospective sponsors, and have the blessing of Portland State University for hosting.

Mid-to-late August is when the university is emptiest. We will need to be done with the conference and cleared out by Labor Day (1 Sept 2014). Ideally, we would host sometime between 10 Aug 2014 to 30 Aug 2014. Earlier in the summer is possible too, but would require planning earlier to ensure availability.

Weather during this time is beautiful, hovering between 75-80F/21-25C, with low humidity.

Our university contact informs us their summer of 2014 is currently clear in that time frame. As long as the bid process concludes before the end of March 2013, this venue will be available and can be reserved.

Until the 2014 bid is decided, we will not place a reservation for the venue.