For families planning to stay at guest houses or hotels, see: External Accomodation for a list of places to stay outside of UCT. 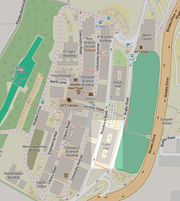 [edit] Directions to the venue

Directions to the venue are available at DebConf16/Directions

Accommodation costs roughly ZAR300 (about USD20) per day, including breakfast. Food (technically lunch+dinner) is also ZAR300. Bookings is through the registration website.

(Bring comfortable warm layers of clothes for indoors as dorms are colder than expected by many. Out-door layers are less crucial except when it rains. Daytime sun can be quite warm. DebConf16/Clothing_and_Dress_code 19:33, 1 July 2016 (UTC))

The accommodation is in the Fuller Hall residence in the southeastern part of the UCT upper campus. About distances between accomodations, hack labs and talk rooms: There are hacklabs downstairs from some of the living accommodations. The conference areas and talk rooms are about 3 buildings away and up the hill. There is no elevator in Fuller. 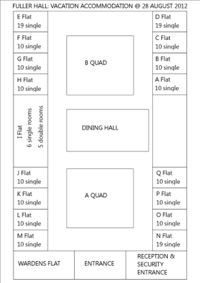 There are a very limited number (5) of double rooms, but we do have permission to move single beds from adjacent rooms to make more double rooms. All the beds, even in the double rooms, are single beds. Fuller Hall normally houses 229 female students mostly in individual rooms with shared bathrooms on each floor. [A typical way to work out mixed genders is to alternate bathroom genders per floor.]

A few more details about Fuller Hall and other residences at the UCT upper campus are available at the UCT website.

A drop-off laundry service is currently operating out of Fuller reception during weekdays. Service forms and bags can be picked up at any time from the reception counter. Return those before 9AM, and they will be delivered back on the same day. Pricing is R50 for a 5kg bag of dirty clothes. Laundry markers are available to facilitate mingling of loads, see Nattie in Orga.

South African power strips usually have outlets for the 2 prong euro plugs. If you have such a cable for your computer, it might be a lot more convenient than using a bulky adaptor.